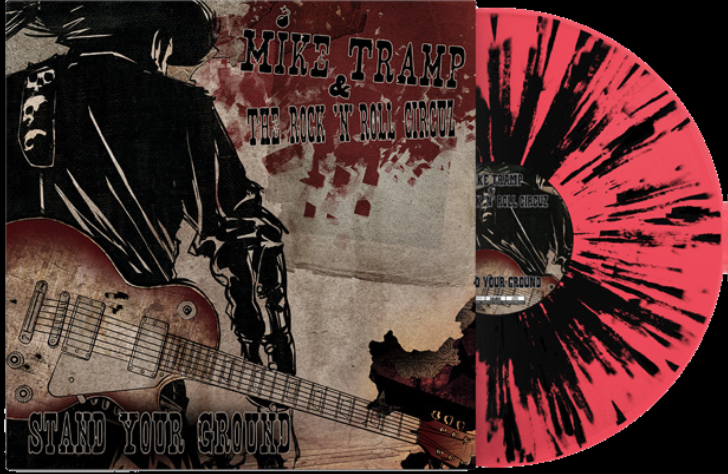 Coming from a “new” band experience with “Rock ’N’ Roll Circus” (released in 2009),
Mike Tramp, the infamous vocalist for acts such as White Lion and Freak Of Nature,
decided to repeat the formula in 2011 with his following record. “Stand Your Ground” was,
thus, released under the monicker “Mike Tramp and The Rock ’N Roll Circus”.

It was a plain rock album with the distant Tramp songwriting. A collection of songs with
memorable choruses, rock solid composition and the in-depth lyrical messages that are
Mike Tramp’s staple. In his Rock ’N’ Roll Circus shone the star Soren Andersen, guitar
player who now serves his time in the Glenn Hughes band, as well as being a constant
collaborator and producer of Tramp’s solo works. And, indeed, “Stand Your Ground” was
recorded at Medley Studios, with Andersen at helm as producer.

Now, for the first time EVER, “Stand Your Ground” will get a vinyl re-release. It will get
reissued in double LP, in two colour variants (each limited to 500 copies) and with sound
remastered at Angioni Studios by Marco Angioni.

“It is always the true test, how good something is when you revisit it many years later”,
Mike Tramp states. “Would you change anything, should you have done it different or is it
still as good and right as you remember. And yes, the fact is, it is that good. “Stand Your
Ground”, is a great kickass rock album, and the bands performance is world class. I am
truly proud of this album”, he concludes.

TRACKLISTING:
A1. Don’t Let Them Put It On You
A2. Alright By Me
A3. Distance
B1. Gotta Get Away
B2. Straight From The Look In My Eyes
B3. Got Me crazy
C1. Wish You Well
C2. The World Is Changing
C3. The Prettiest Girl
D1. The Soldier Never Started A War
D2. Say What You Will
D3. Hymn To Ronnie